Here’s a little secret; my name’s not Rosie.

(In fact, I have a theory all Rosie’s were born by another name unless they were born dogs.  Seriously, I’ve met more pets called Rosie, than people!)

I was named after my paternal grandmother; the late Rosaria Carmella Panetta nee Vallelonga.  A petite Italian woman,  who lived a simple life in the small southern Calabrian village of San Nicola. Although we never spoke the same language, and only met three times in my life,  I remember her a small, sweet, generous woman, who was so little I was already practically the same height of her at the age of about 10!  It’s fair to size I’ve inherited a lot more from her than a name! #ShortyLife

My parents kind of went traditional when it came to naming us; my brother, the eldest, was named after our paternal grandfather; my sister after our maternal grandmother, and when it came to me … well, I guess it just made sense to bounce back to dad’s side of the family. (Funnily enough when my little sister Luisa ‘accidentally’ came along, they’d run out of eligible grandparents … so it was like free-choice for them!)

But before I was born, my parents decided that “Rosaria” probably wasn’t going to be as popular in Australian pre-schools as it was in Italy & feared that I would eventually come to hate it.  I mean, unless you can roll that ‘r’ right there in the middle, it just doesn’t sound right. So, they decided to make it a little less southern-Italian, and a little more northern suburbs of greater Adelaide-friendly: Rosalie it was. 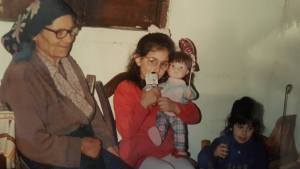 With Nonna Panetta. The cute one in the middle’s my sister; I’m the one licking what I can only assume is Nutella (or grappa) off my lips!

Now I don’t want to point fingers, but I think it’s my brothers’ fault that they softened up on tradition.  You see, they took quite a chance with him – his name is Ilario. If there was a male version of Hilary, that is what it would translate to in English. In the absence of that, growing up he would often get “Larry” – much to my mother’s disgust – and at worst, the occasional “Laz”. I think it was with that precedent they decided, pre-natal, that they would “Aussie” up my name; I mean if anyone was going to cut their kids name back a few syllables, it was sure as hell going to be them doing it!

In some ways I’m glad they chose Rosalie; I mean, it made for a lot less awkward first days of the school year when your new teacher fumbles her way through class list.

In other ways though,  I’m sad they thought I would eventually think Rosaria too long, too traditional, too … ethnic.

When a mystery Australian actor by the name of  ‘Mustafa’ was propelled into the public agenda this week – thanks to Waleed Aly’s moving Gold Logie-acceptance speech dedicated to diversity and ‘people with unpronounceable names – I couldn’t help but draw some comparisons to my parents’ experience.

I know my mum, and half of her 11 siblings (nothing says good Italian Catholic family like having more kids than you can count on your fingers!) no longer go by the names my grandparents gave them at birth.  In fact, I know my mum would hate if I shared her “real” name with you here (don’t worry, I respect frozen take -away containers of your lasagna too much to do that to you, Mum).

And I know that as a second generation immigrant I’ve been lucky enough to escape the prejudices my parents endured when moving  to &  growing up in Australia. It was the days when words like “wog” and “dago” were used maliciously.

I also consider myself lucky, I’ve not had to face a “Mustafa name-change” situation like Waleed Aly referred to this week.  I mean, I didn’t have to shorten my name for the sake of my career; Just like John’s get turned into ‘Johnnos’ in this country, I kind of just became a Rosie somewhere between high school and my radio career. (But  believe me once I’m ready for AM radio, Rosalie will be back to give you her two-cents on sh*t you didn’t even ask her to give you her two cents on … well like, more than Rosie, is kind of doing already here)

So while I probably should have been a Rosaria, I’m glad I’m a Rosalie who gets called Rosie. I like the fact that, in a way, I get to carry a small piece of my family history, and the memory of my Nonna.

In saying that, if you’re reading this dad, the jury is still out on whether Cosimo is an option for our first born son … I mean, it takes a pretty strong character to pull that off! You know? Okay, love you, bye. x 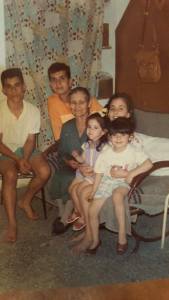 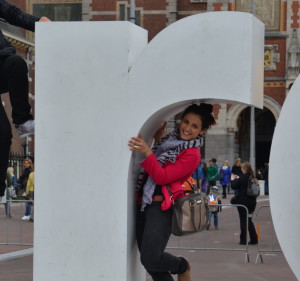